A Snapshot of On-Site Solar System Considerations and Costs

Over the past few months, we’ve provided guidance and resources on how to identify, properly scope out, and implement facility optimization projects. Once your facility has been optimized from an operations perspective, you now have the opportunity to raise the sustainability bar and realize further cost reduction by considering renewable energy sources – more specifically, solar energy.

Renewable energy is derived from fuel sources that are continuously available. This includes solar, geothermal, wind, tidal, hydro, and biomass energy sources – all of which can be harnessed continuously without exhaustion. And, with the exception of some biomass fuel, these renewable energy sources do not emit greenhouse gas during the power generation process. In this blog, we’ll take a closer look at solar energy, one of the most cost-effective and easy to implement renewable energy sources. Pairing solar energy with a storage system can mitigate costly demand charges, reduce overall energy costs and carbon dioxide emissions, and provide resiliency at your facility.

In its simplest form, thermal energy from the sun can be used to heat fluids directly. Thermal energy from the sun can also be converted into electricity using photovoltaic (PV) panels. More complex systems, such as concentrated solar, focus the thermal energy to generate steam, which is then used to generate power. Although abundant, the availability of solar energy is not constant. Time of day and weather affects solar energy generation. In addition, the period of time when solar energy is most available (early morning, afternoon), does not coincide with when electricity demand is typically most high (late afternoon, early evening). However, the benefits of solar energy are significant. The energy production process from solar emits zero greenhouse gases, solar PV panels can be installed almost anywhere and there is no mechanical equipment that requires maintenance.

At industrial or office facilities, on-site solar energy can be installed on the roof, as carports, or ground-mounted. Here we outline the feasibility and considerations for each. But first, it’s important to understand the ownership of your facility and the land it sits on. Solar systems have a service life of about 20 years. If the facility is leased, installing a solar system might not be an option – although, some landlords may be open to installing a solar system on their property and selling the electricity to their tenants, depending on utility regulations in the area. Definitely have these conversations before proceeding any further.

For a roof-mounted solar system to be economical, the roof size should be greater than 30,000 square feet. Flat roofs are ideal as the panels can be oriented facing south, the best position for northern hemisphere locations. If the roof is pitched, again, a south-facing roof is best for a solar system. Of course, West and East-facing roofs can still work, but the system will not produce as much power.

Is the roof in good condition? If the roof needs to be replaced in less than 2 years, consider moving up the replacement schedule and install a rooftop solar system at the same time for efficiency. If the roof replacement is farther out, there will be added cost to replace the roof with the solar system on the roof. Lastly, investigate whether any part of the roof is shaded from nearby buildings, tall trees, or other structures as those could affect power generation.

Carport solar systems are usually more expensive then roof-mounted systems as additional materials are needed to create a sturdy structure to support the panels above the ground and be high enough for cars fit beneath the panels. However, carport systems are highly functional in that they shield vehicles from the weather, in addition to serving as an outward visual symbol of a companies’ commitment to sustainability. In winter weather locations, snow removal procedures will need to be accommodated, so it is important to design a solar system where melted snow can be effectively drained as not to cause dangerous icing conditions in the parking lot. And as with roof-mounted systems, you’ll want to ensure a carport system won’t be impacted by shading from nearby buildings or trees.

Ground-mounted solar systems can also serve as a visible symbol of sustainability commitment. However, it may also be viewed as an “eyesore” by some. Most ground-mounted systems need to be fenced-in per regulation to protect the general public from electric equipment. Due to the space needed for fencing requirements, you’ll need to adjust the percentage of vacant land that can be used for power generation. When considering ground-mounted solar systems its important to understand the long-term strategy for the site, what ground maintenance would be needed, such as grass mowing, and what shading could impact the panels.

Financial cost and savings from an on-site solar system depend on many factors. For an estimate, start with gathering some basic information to inform if further analysis is warranted.

Owning a solar system requires capital investment, but, the capital needed could be offset with generous tax incentives and rebates from your utility company. Owning a system also means the maintenance, such as washing the panels periodically and checking the electrical connections, falls on you. On the plus side, the cost per unit of energy is the lowest with owned systems.

An alternative to owning a solar system is Power Purchase Agreements (PPA), a financial agreement, where a developer arranges for the design, permitting, financing, and installation of a solar energy system on a customer’s property. The developer then sells the power generated to the host customer at a fixed rate that is typically lower than the local utility rate. With a PPA, the cost per unit of electricity will be higher compared to an owned system. PPA contracts can offer a simpler path to solar power, however, the terms of the PPA can be complex and typically span 10-25 years. In certain parts of the US, electricity can be competitively purchased on the open market, making long-term PPAs less desirable in a downward trending environment.

An energy storage system can be paired with a solar system to store excess energy produced when demand is low. In some states, such as California, it makes economic sense to use storage systems to manage peak demand charges, known as peak shaving. For example, the solar system can charge the battery units when the grid demand charges are low. When demand charges are high, use solar power and the stored energy to satisfy energy needs and reduce peak demand costs. Peak shaving cost-benefits analysis can be complex, so you’ll want to engage a reputable energy storage company to generate the financial analysis. Less common and much more complex is using excess solar to produce clean hydrogen as opposed to storing energy in a chemical battery system. The hydrogen is then used in a fuel cell system to produce electricity when solar is not available (i.e. night time). 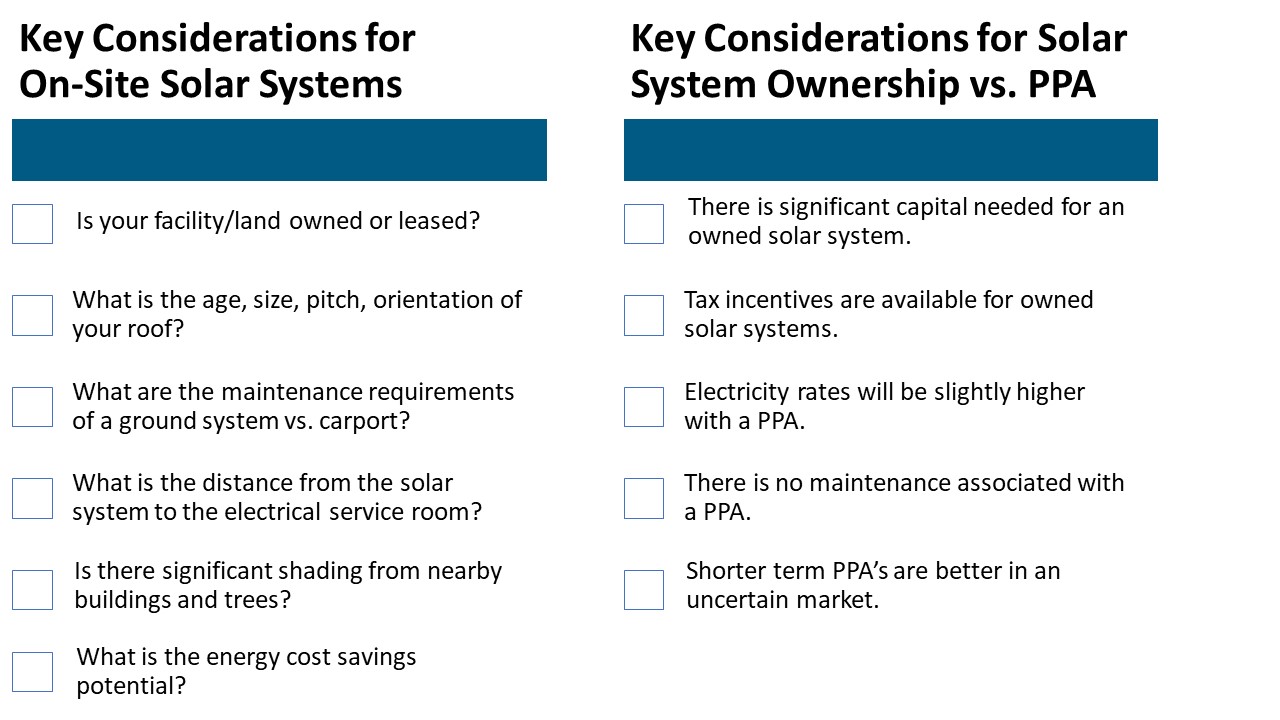 Download Antea Group’s ebook to learn strategies that will optimize the sustainability and business resiliency of your facilities and assets.

In the meantime, if you have any questions about Facility Optimization Support, contact us today.

Sign up for our monthly e-newsletter, The New Leaf. Our goal is to keep you updated, educated and even a bit entertained as it relates to all things EHS and sustainability.

Get e-Newsletter
Back to overview overview

Contact us to discuss your environment, health, safety and sustainability needs today.

How to Successfully Implement Your Facility Optimization Project

So, You’ve Completed Your Facility Walk-Through…Now What?

Select the type of cookies you want to accept